So earlier this year I reviewed the PineBook Pro. I was pretty impressed with it at the time, but am I still enamored with this $200 laptop? I’ve now been using it for at least 90 days. I know that because I haven’t rebooted it in 90 days. Really. 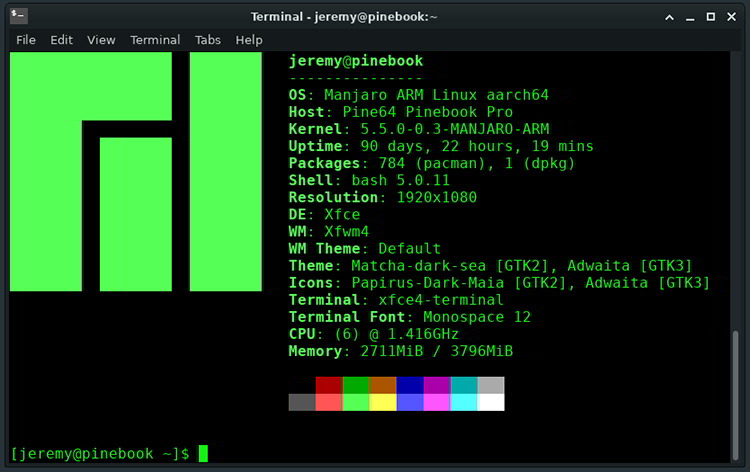 Here is my review of it after using it for three months.

What is the PineBook Pro?

The PineBook Pro has some pretty lofty goals. I like lofty goals, so when I read about it, I ordered one. According to the Pine64 organization:

The Pinebook Pro is meant to deliver solid day-to-day Linux or BSD experience and to be a compelling alternative to mid-ranged Chromebooks that people convert into Linux laptops. In contrast to most mid-ranged Chromebooks however, the Pinebook Pro comes with an IPS 1080p 14″ LCD panel, a premium magnesium alloy shell, 64/128GB of eMMC storage (more on this later – see asterisk below), a 10,000 mAh capacity battery and the modularity / hackability that only an open source project can deliver – such as the unpopulated PCIe m.2 NVMe slot (an optional feature which requires an optional adapter). The USB-C port on the Pinebook Pro, apart from being able to transmit data and charge the unit, is also capable of digital video output up-to 4K at 60hz.

So it’s an open-source alternative to a Chromebook, cheap computing you can hack and tweak. When I first reviewed it, I said:

This laptop is better than any $200 laptop should be.

How I’ve Been Using the PineBook Pro 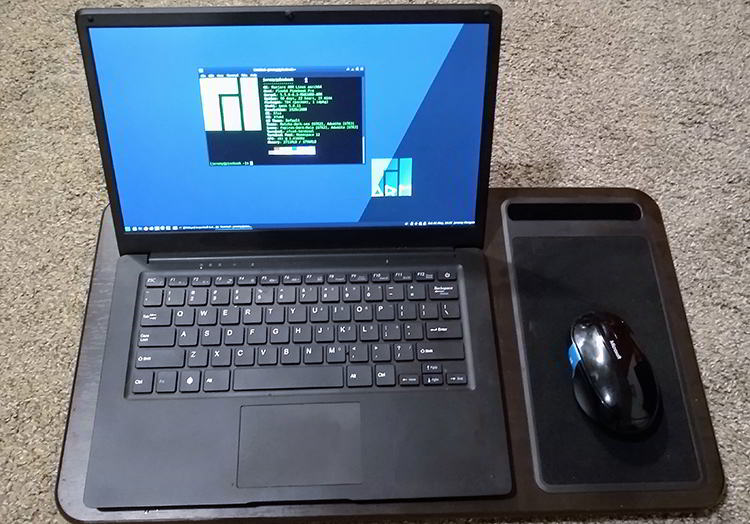 So, I recently redesigned this entire website that you’re viewing. I converted it from Octopress to Hugo. I started the project on the PineBook laptop one night and decided to use it to finish it out. So I did the entire (200+ article) conversion on that laptop. It did great.

I also wrote a Go/Hugo powered news section of the site (which I decided not to keep) on this laptop. I wrote a couple of cool Python scrapers with it as well.

I have written several articles on it since then, including the one you’re reading now.

I have also used it as a “play” laptop. So when I’m sitting around with the family chilling out, I grab it and browse the internet, read Reddit, HackerNews, etc. It makes a fantastic “fun” laptop for that. I can even hit YouTube and watch videos if I want to.

I have a couple of Chromebooks too, and they’ve been collecting dust since I got the Pinebook Pro.

Surely it hasn’t been all peaches and roses, otherwise, I would have put my Thinkpad on eBay by now, right? Well, there are some small downsides to it.

My Verdict after 90 Days

So after ninety days using this, do I still love the PineBook Pro? Absolutely. I’ve put this thing through its paces. I haven’t rebooted it for 90 days (though I’ve restarted services as needed), and I’ve used it almost every single day. I grab it and use it to grab statistics, or send an email, build software, etc. I use it a lot. One of the greatest things about this laptop is this:

It keeps you from distractions to work on stuff that matters

I can’t play video games on this thing. It’s not the best Netflix machine I own. But it’s excellent for doing productive things, which is one of the goals of the project!

So I can communicate with people, and produce things with this laptop that costs $200. I would say the folks behind this project have met their goal.

If you’re interested in a PineBook Pro, it looks like they’ll be available in Mid May. Get yours now!

Verdict: I still love this thing, and I think you should get one.