Want to learn how to write some apps for the Raspberry Pi? Today I’m going to kick off a new series of tutorials related to the Raspberry Pi and programming. This is a series that will be aimed at beginners, but seasoned programmers may want to take a look as well. The Raspberry Pi was created for education, tinkering and bringing technology to the far parts of the world. This is a mission I firmly stand behind, so I’m doing my part to throw some new stuff out there to get people excited about becoming a programmer with this awesome device.

Python is arguably the biggest programming language on the Pi right now, for good reason. It has lots of tools, is well supported and development is really fast. Plus it’s easy to learn. It’s very powerful and you can even create simple games and graphics with it. I think it’s a great language to get started with as you’ll see some instant results.

We are going to be using Python and IDLE for our first part of the tutorials, and these are already installed and present if you’re using the Raspian image. Here is what IDLE looks like: 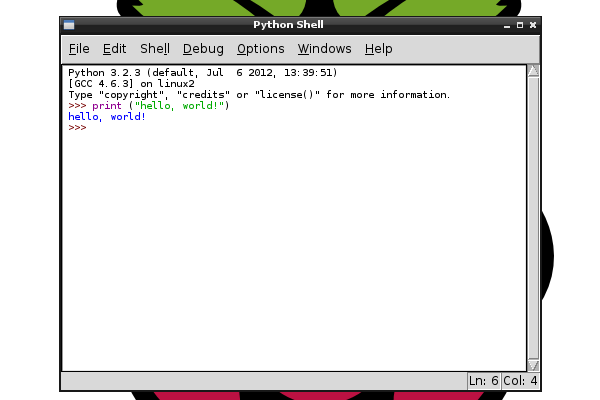 This is our Python console and editor. We’ll be using this extensively to create our programs. While there are many IDEs out there, it’s always good to start with the console, and learn a little how Python works. This is it! There’s no long list of tools to download, you can get started programming Python right away with the default Raspian image.

Let’s get comfortable with the Python environment. For this tutorial we’re only going to be covering some basics using Python version 3.2.3. We’ll run a few commands at the console to play with output, but we’ll want to create an file later to make programs that are actually useful.

At the prompt (where it shows >>>) you’ll want to type in the commands I show and press enter.

At the prompt you saw how you could output text, but you can also do arithmetic at the prompt. Type in the following and press enter:

As you can see, it outputs the answer. But you can also use multiple operators and expressions.

and you’ll see 22. It’s not terribly useful at this time, but it’s nice to know it’s available. 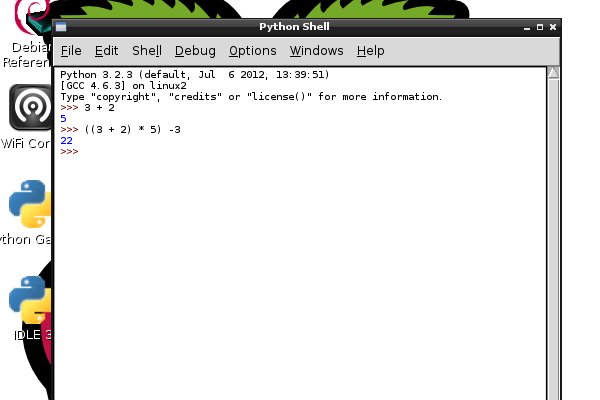 Most of the time you’ll use the prompt for setting configuration parameters. For any real useful programs you’ll want to create a file containing a list of commands.

2. Creating a file to run

Let’s create a file and run some stuff. In the IDLE 3 window, select File -> New Window 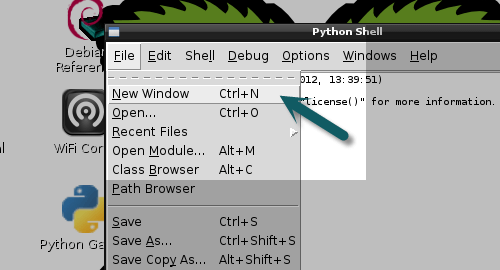 You will see a new window that comes up, and that’s where you’re going to be putting your code. Then you can save it to a text file that Python can run. 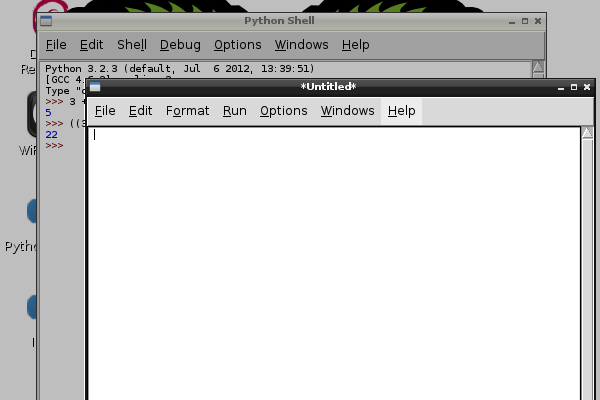 In this window, type in the following code:

You should see a window that looks like this: 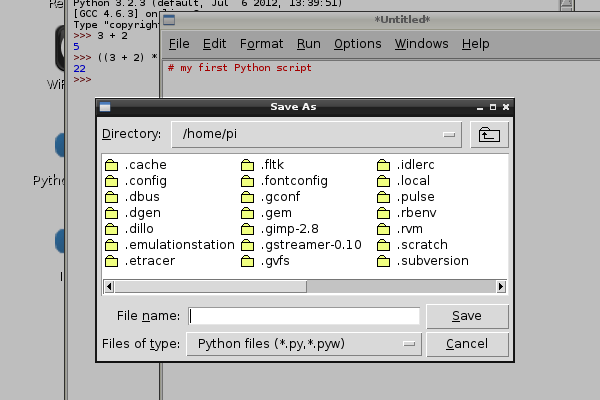 Type in a file name like “myfirstprogram.py” and click save. Now everything you put into this file will be saved and interpreted by Python.

Python is an “interpreted” language, which means the Python program will read a text file line by line and act based on the commands you give it. This is different from a compiled language like C where you a compiler reads the code and creates a program. We’ll do some C programming later in the series and you’ll see the differences later.

Now that you know how to create a file we can play with some input and output. First I should let you know that the file you just created won’t exactly do anything. That’s because all we did was put a comment in the file.

A comment is something that’s ignored by the Python interpreter. The purpose of a comment is to leave yourself notes, or leave notes for other programmers. This makes your program easier to understand.

Let’s make our file actually do something. Type in the following:

print "this is output"

Now, go up to the Run menu, and select “Run Module”

Once you select this you’ll get the following message: 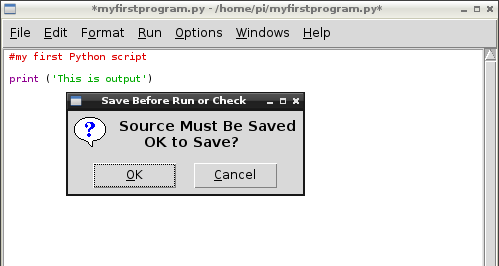 This is a message telling you to save your file before running it. Click OK.

Now this file will close, and back in your terminal window you’ll see the following: 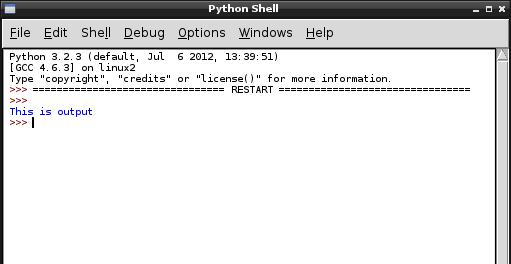 Ask for and display a name

Go back to your editor window (it’s still open) and erase everything. Put in the following lines:

You will see a prompt that’s asking your name:

What is your name?

As you probably predicted, you should type in your name. Press enter.

You should see this:

Pretty cool huh? So how does this work?

This is great example of input and output. Let’s do a little more, just for fun. Now type the following into your editor:

You will see that it now asks you a series of questions, and once you fill it out, it will display a line back to you after putting all the data together: 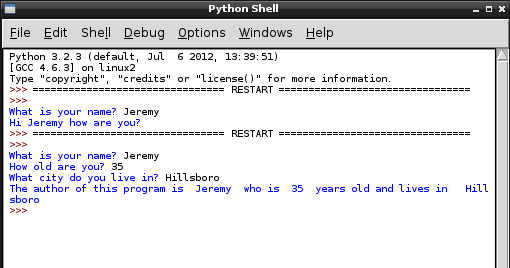 While we really didn’t dive that deep into programming the Pi, or even Python I hope this will at least give beginners a general idea of how to get started. I will be adding some more detailed tutorials in the future, but if you can’t wait and really want to keep going check out the Python 3 Tutorials at Python.org.

You don’t have to stick with Python 3 either. Python 2.6 is still in very active use and there are actually more packages available for it if that’s what you’d prefer. Both versions are very good and it doesn’t hurt to learn them both.

In future tutorials we’ll explore python deeper, and even get into some other languages such as C++ and assembler. I’ll also show some more useful things you can do to get you really pumped about programming on the pi.

If you have any questions, Let me know!!