So I found yet another cool use for a Raspberry Pi. You can actually use it as a file server, or more accurately a controller for a file server. All you need is your Pi and a nice external drive and you can serve files to anyone on your network. It’s pretty easy, I’ll show you how.

You need the Raspberry Pi set up and connected to your network. You’ll also need an external drive. I’m using a Western Digital My Book 500 GB drive.

But this drive is a few years old, so if you’re going to buy one you can pick up a 3 Terabyte Model for around $120. Since your SD card doesn’t have a lot of space and doesn’t handle frequent reading and writing you’ll need to get an external USB drive. 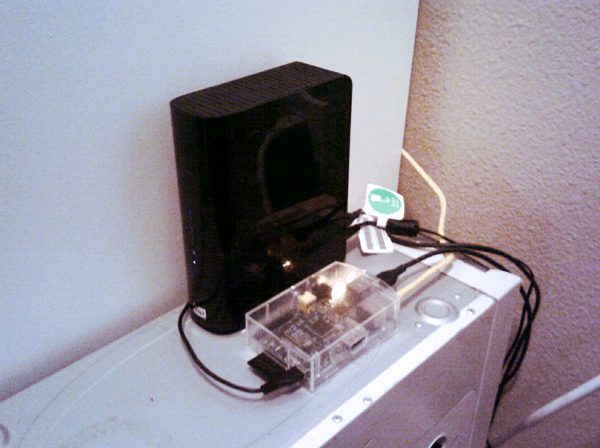 As with most of my tutorials, you’ll need an install of Raspbian to do this tutorial.

The first thing you need to do is make sure your Raspberry Pi can see the external drive. Before you plug it in, open up an LXTerminal (or get to the prompt through SSH) and type in

and watch the output. Now plug in the USB drive. You should see something like this come up:

You want to look for a string identifying your USB device, but the [sda] is the part you want to pay attention to. Another thing to note: Some drives like the WD My Book come with a built in CD-ROM emulator as well for software installation. You don’t want to mount this, so look for the size of the device (in my case 499GB).

To escape this screen, press CTRL+C.

So first we want to create a location for this drive on the Raspberry Pi. This is done with the following command:

Now, you want to mount the drive:

If you get a message saying ntfs-3g isn’t supported, install it:

This will enable you to mount it.

Now, you can cd to /media/USBDRIVE and see it, and it should also pop up in your file manager: 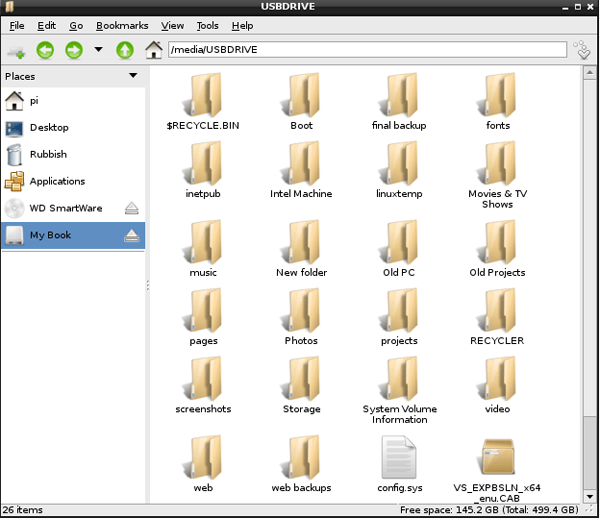 Mount the drive at startup

This step is optional but if you want your drive to mount automatically on startup, here’s what you do:

In the fstab file, add the mount information (yours may vary slightly)

Make sure you have write permissions to it:

Now, reboot your machine and make sure the drive automatically comes up.

Next, we’ll install SAMBA to share this drive on your network.

Now that Samba is installed, let’s add a user:

Now, make a backup of the Samba config file

and now we’re going to open that file and make some changes:

The first thing to look for is workgroup.

For Windows XP or Vista:

(or the name of your network workgroup)

(or the name of your network workgroup)

Next, we want to enable user security. Remove the hash tag (#) so the entry looks like this:

For better performance, do the same with TCP_NODELAY

Save and Quit Nano. (CTRL + X and answer Yes)

Run a check on the config file:

As long as it says “Loaded services file OK.” you won’t have a problem.

Now you’re on the network!

Connect to your Pi from Windows

To connect to your Raspberry Pi from Windows, you’ll need to know your hostname. Type in:

and check the output. For me my hostname is “raspberrypi” (I know, creative right?).

On your Windows machine, type in Start -> Run and type in

(or whatever your hostname is) 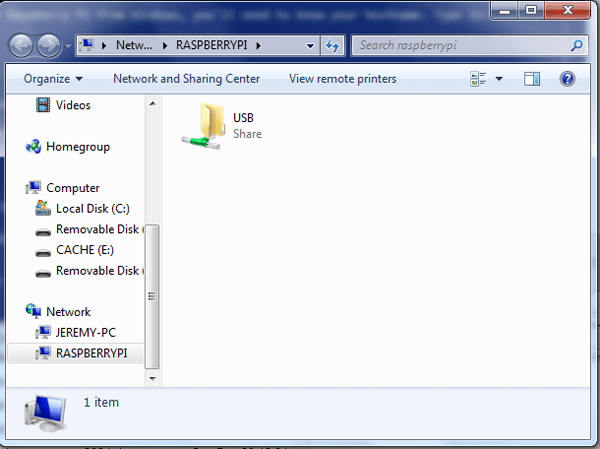 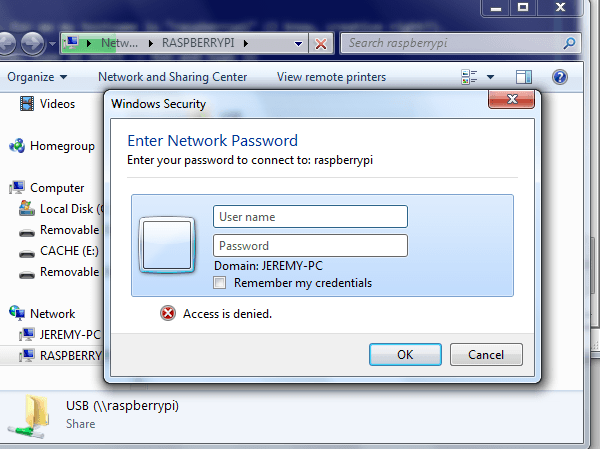 Here you want to enter the username and password you set earlier with “smbpasswd”.

You’ll now see that you can browse the folder: 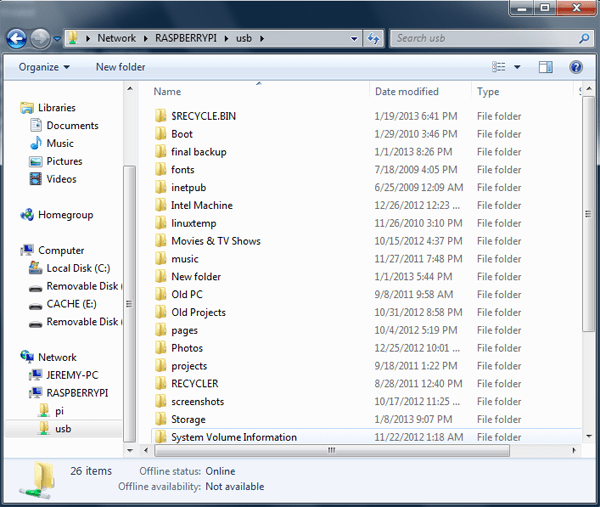 Add this as a drive on your computer

This step is also optional, but you can add this as a drive on your computer. Go to “My Computer” or Start -> computer and select the button at the top that says “Map Network Drive”.

In the next box, browse to your USB drive on your Raspberry Pi and add it:

Now it will be added automatically as a drive on your computer!

Make sure you have an additional power supply going to your USB drive. Don’t rely on the Raspberry Pi to power it, as that is too much of a drain for it. The drive I used has its own power supply and I haven’t had any problems with it.

You may also need to Change 128bit to 40-56 bit encryption for file shares under Advanced Sharing Options to make it work with certain versions of Windows.

I hope this tutorial has shown you how to set up a file server on your network. I don’t keep a lot of stuff on this drive, but I don’t exactly want to lug it around and plug it in to every computer I want to pull the files on (first world problems, I know). So it’s nice that I can now grab files off here from any computer in the house with ease. I could do this with any Linux or Windows machine, but the idea of a big loud machine to do the same task is wasteful and more expensive.