If you’re thinking of running your favorite Windows .Net applications, or setup a fancy ASP.NET server, you may be disappointed. While Mono does a great job and the Raspberry Pi performs great for what it is, I wouldn’t say this solution is ready for the big leagues, and definitely not something you want to do in a production or commercial environment.

If you want to tinker around and learn C#, and maybe build a few cool apps this is a great way to do it. The Raspberry Pi is a great tool for learning, and that’s the purpose of this project. 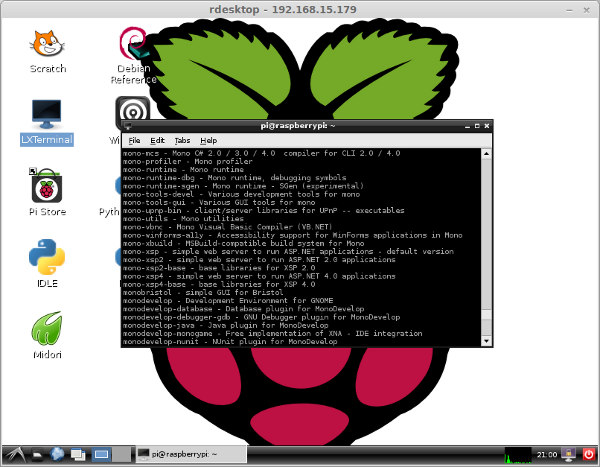 There are tons of MONO applications available in Raspbian but we’re only going to cover some basics.

Mono is an awesome project that brings .Net to Linux. It’s available for the Raspian image, and super easy to set up.

And install the Mono Runtime:

This one could take a while. It updated a lot of stuff on my system.

Note about MonoDevelop: You can install this on a soft float install of Raspian or Arch but it’s not the best performing application in these conditions. Mono still has a lot of problems with the Pi that need to be ironed out, and MonoDevelop is a long ways off.

Load up LeafPad (or whatever your favorite text editor is) and create a file called monotest.cs and save it somewhere where you’ll find it.

Now, open up an LX Terminal and go to where this file is located (I just put it in a folder called monotest as well). Type in the following:

This should only take a couple seconds. Then list the files in your directory (using the ls command) you will see a new file:

Now, you can run the monotest.exe by typing in: 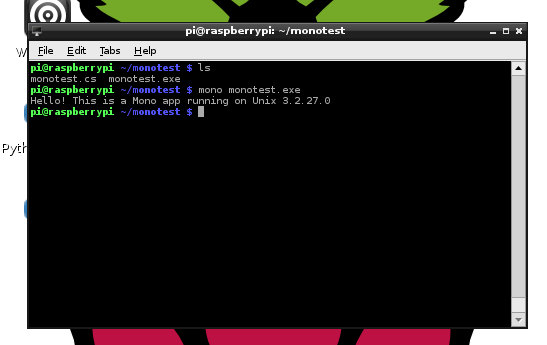 And you’re ready to go! If you see this, that means it worked.

So what can you do now?

You can write basic C# console applications all day with this setup. You can build neat automation items, and even some GUI stuff if you really want to dig into it. You can write .Net 1.0 - 4.0 applications with varying success. The most valuable thing you do is learn some C# basics and experiment like crazy.

C# is one of my favorite languages, so it’s awesome to see options for playing with it without being forced to use Windows and Visual Studio, which are great tools but expensive for hobbyists. As I said this is nowhere near something for production use, but excellent for tinkering and learning which is of course what the Raspberry Pi is all about!